Phase Coordinates Method: An Example of Calculating a Transfer Matrix

Calculation of transfer matrices of multipoles of various shapes is quite simple. Transfer matrices are a mathematical description of the circuit under consideration, which defines the relationship between the input quantities and the output values of the multipole.

Consider an example of calculating the transfer matrix for the circuit in Fig. 1. 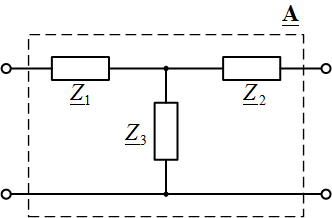 To determine the transfer matrix for the scheme under consideration, equations are compiled according to the laws of Kirchhoff. Preliminary designate the currents and set arbitrarily the direction of currents and voltages (Fig. 2).

Fig. 2. Setting the directions of currents and voltages

For the circuit, equations are compiled according to the first and second laws of Kirchhoff:

These equations are easily solved using the Matlab software package. Below is a script for calculating a system of equations and extracting values at the input U1 and I1 depending on the output values for the given example.

We present the obtained equations in the form of a matrix equation connecting the input current I1 and input voltage U1 and output parameters of the multipole:

The resulting coupling matrix of the input and output quantities is called the direct transfer matrix of the multipole A. In the general case, the equation of a multipole form A is written as

Form A equations are applied if multipoles are connected in cascade (Fig. 3).

In this case, the equivalent direct transfer matrix of the entire circuit will be determined by the expression

In addition to form A equations, form Y equations are widely used. These equations are applied in the case of parallel connection of multipoles (Fig. 4). 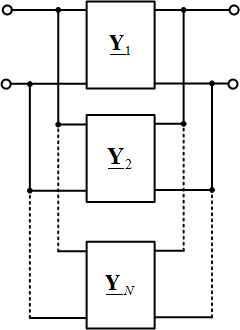 For such a scheme, the equivalent form Y matrix will be determined by the formula

The form matrix A and the form matrix Y are interconnected. The attached files recount these matrices from one form to another in the Matlab language: