The equivalent circuit of the three-phase power system is shown in Fig. 1. It is given by the resistances along the straight and zero sequences, as well as the equivalent voltage source. 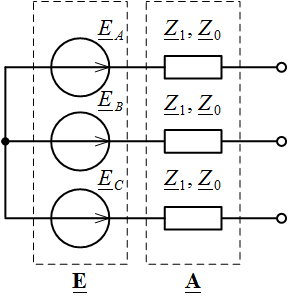 In a symmetric three-phase system, the phase emf vectors are displaced relative to each other by 120 °. Taking into account possible regulation, the equivalent voltage source matrix E by the phase coordinate method will be determined by the expression

where U is the rated voltage of the network (linear or phase, acting or amplitude); k – voltage regulation coefficient; δ – angle of power transmission.

Z1, Z0 – resistance of the equivalent system in a direct and zero sequence, respectively.

The attached file contains the calculation of the matrix form A and voltage of the equivalent power system in Matlab: A_eqsys.m