The equivalent load in phase coordinates is given by a constant active and reactive power. Based on the magnitude of the load power and voltage, a direct transfer matrix is calculated.

In fig. 1 is an equivalent constant load equivalent circuit. Resistance is determined only in a direct sequence and depends on the total load power. 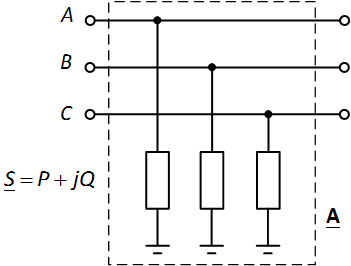 In phase coordinates, the equivalent load is described by the direct transfer matrix

The attached file shows the calculation of the equivalent load form A matrix in Matlab: A_load.m