Phase Coordinates Method: An Example of Compiling a Network Model

Consider an example of compiling a power transmission model using the phase coordinate method. In fig. 1 shows the power transmission, a mathematical model of which must be compiled. It is necessary to determine the currents in the short circuit mode at the beginning of the line.

The following options are available for various power transmission elements:

In the phase coordinate method, the studied transmission will be presented in the form of a cascade connection of multipoles (Fig. 2). The figure also shows the sought currents and voltages.

Fig. 2. The investigated transmission described in the basis of phase coordinates

In Matlab, matrix direct transmission of elements will be calculated using the following functions:

To calculate currents and voltages at the beginning of a power line, it is necessary to compose an equivalent direct transmission matrix for the circuit:

The investigated circuit of Fig. 2 will be represented by an equivalent circuit (Fig. 3). 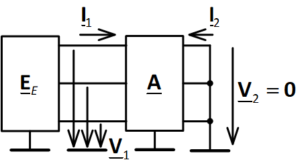 In the calculation, the voltage of the power system EE is known. In addition, it is known that the voltage at the end of the power transmission behind the load is zero (since there is a grounded neutral). To calculate the currents at the beginning of a power transmission, it is necessary to recalculate the direct transfer matrix A into the form matrix Y using the A_to_Y.m function. As a result, the circuit of Fig. 3 can be represented in the form of a circuit with a conductivity matrix (Fig. 4). 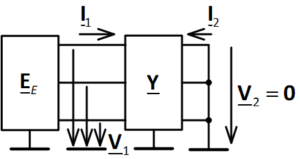 From the diagram of Fig. 4 shows that

. From here you can calculate the currents:

By calculating the current I1, you can calculate the desired current and the desired voltage. To do this, consider in more detail Fig. 2. Let us designate the current obtained in the diagram (Fig. 5).

Fig. 5. The investigated power transmission described in the basis of phase coordinates

As already mentioned, the shape matrix A connects the currents and voltages at the input and output of the multipole in a certain ratio. For the circuit of Fig. 5

Thus, in order to determine the desired quantities, it is necessary to solve this matrix equation. His decision is as follows

is inverse matrix for the direct transmission matrix of the power system AE.

The calculation presented in the note is given in the attached program file in the Matlab environment.